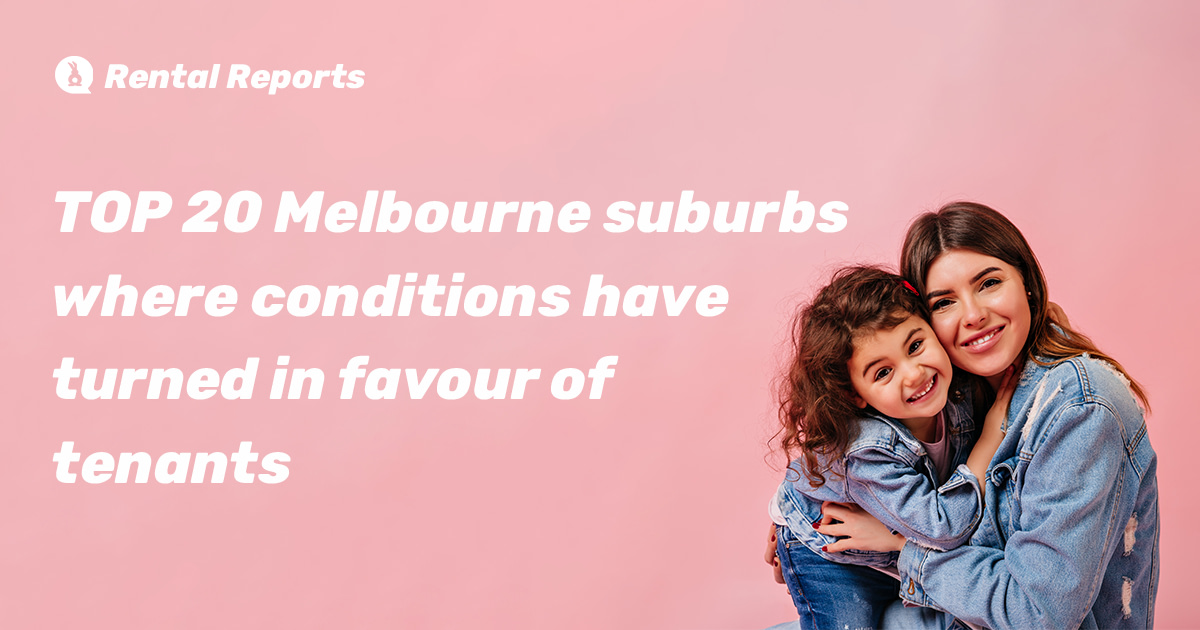 New research commissioned by RentRabbit.com.au has found the top 20 Melbourne rental markets where conditions have most turned in favour of renters over the past 12 months.

The quarterly RentRabbit.com.au Better Renting Report identifies Melbourne’s top 20 suburbs that are both suitable for renters and where conditions have turned in favour of renters over the past 12 months.

To make sure suburbs were tenant-friendly, they needed to be large enough (at least 1,000 properties) and close enough to the Melbourne CBD (within 200km).

To make sure conditions in those suburbs had turned in favour of renters, their vacancy rate needed to have increased by at least 0.6 percentage points over the past 12 months, while their median weekly rent needed to have either fallen or remained unchanged during that period.

All the suburbs had a vacancy rate of at least 1.9%, while weekly rents ranged from $350 to

RentRabbit.com.au co-founder Ben Pretty said the research shows how tough life can be as a tenant in Melbourne.

“The RentRabbit.com.au Better Renting Report highlights that Melbourne renters are able to find some tenant-friendly suburbs where vacancy rates have increased over the past year and rents have either fallen or held steady – which, in an inflationary environment, is a fall in real terms,” he said.

“That said, those tenant-friendly suburbs are very much a minority of the market right now.

“This is all about supply and demand. Where supply is relatively low and demand relatively high, it’s hard for tenants to find accommodation, which leads to falling vacancy rates and rising rents.

12.  The unit market of Bonbeach (Kingston)

14.  The unit market of Mordialloc (Kingston)

16.  The house market of Ashburton (Boroondara)

17.  The unit market of Parkdale (Kingston)

19.  The house market of Ivanhoe (Banyule)

When we start feeling stressed and bogged down, we take ourselves for a relaxing spa day. Why not do the same thing for our living space? It’s easy to let things pile up when we use the same space for so many different things. Clearing the clutter and giving your space a makeover will help…

How Engagement Will Transform Property Management Rental is broken. It’s nobody’s fault—but everybody’s problem. For agency owners, that means rent rolls are broken. Unhappy tenants, under-performing managers, unhappy owners—all quietly trashing your rent roll. Making you vulnerable to the next market disruptor. But there’s a new generation of solutions—and Rent Rabbit is on a mission…

A positive landlord-tenant relationship is crucial to any rental experience. Most landlords will go to great lengths to find and keep qualified, trustworthy tenants. Those who honor lease terms, respect the property and display financial responsibility. However, your desirability as a tenant goes beyond a good credit score and a clean background check. There are…

Searching for the ideal home for your family is both a thrilling and a difficult endeavour. The most common questions renters ask themselves are: What kind of property is it? What criteria do you use to choose the ideal location? Is it better to live near your workplace or your children’s school? When it comes…

You can now make your review anonymous – all by Verifying Your Account. Remove your name and get a Rent Rabbit ID (eg. RR_ID001) If you’re a renter, it may have crossed your mind that a review website can leave you exposed — after all, putting your name to a review may have the potential…