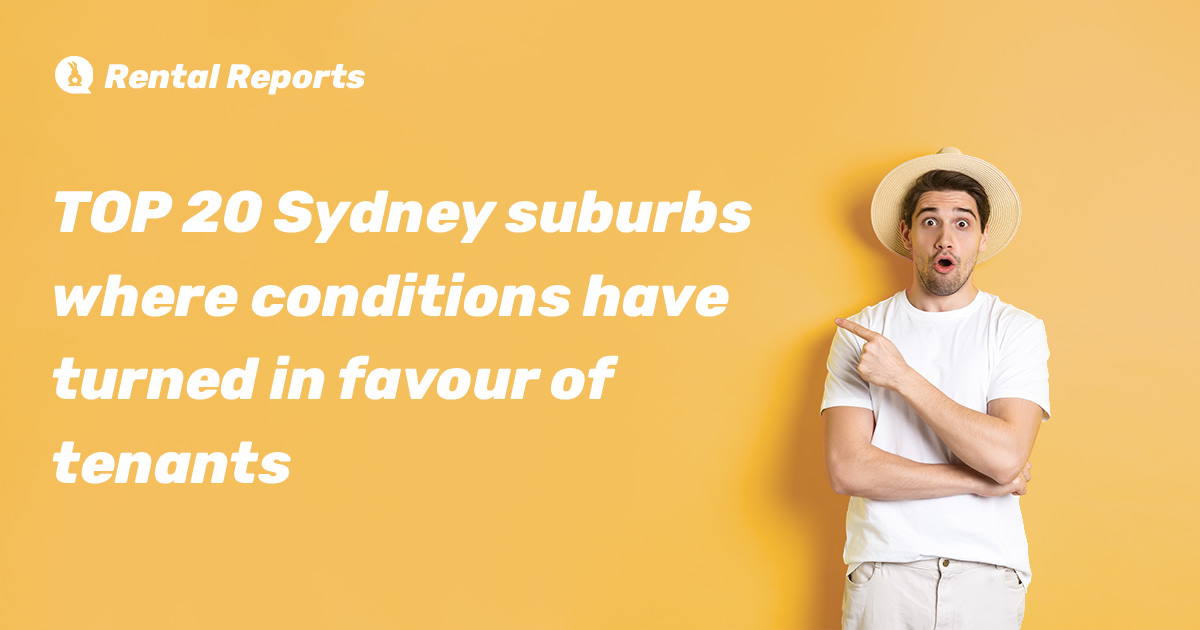 New research commissioned by RentRabbit.com.au has found the top 20 Sydney rental markets where conditions have most turned in favour of renters over the past 12 months.

The quarterly RentRabbit.com.au Better Renting Report identifies Sydney’s top 20 suburbs that are both suitable for renters and where conditions have turned in favour of renters over the past 12 months.

To make sure suburbs were tenant-friendly, they needed to be large enough (at least 1,000 properties) and close enough to the Sydney CBD (within 200km).

To make sure conditions in those suburbs had turned in favour of renters, their vacancy rate needed to have increased by at least 0.4 percentage points over the past 12 months, while their median weekly rent needed to have either fallen or remained unchanged during that period.

All the suburbs had a vacancy rate of at least 1.7%, while weekly rents ranged from $285 to

RentRabbit.com.au co-founder Ben Pretty said the research shows how tough life can be as a tenant in Sydney.

“The RentRabbit.com.au Better Renting Report highlights that Sydney renters are able to find some tenant-friendly suburbs where vacancy rates have increased over the past year and rents have either fallen or held steady – which, in an inflationary environment, is a fall in real terms,” he said.

“That said, those tenant-friendly suburbs are very much a minority of the market right now.

“This is all about supply and demand. Where supply is relatively low and demand relatively high, it’s hard for tenants to find accommodation, which leads to falling vacancy rates and rising rents.

2.  The unit market of Girraween (Parramatta)

6.  The unit market of Berala (Auburn)

9. The house market of Marayong (Blacktown)

11. The house market of Werrington (Penrith)

12.  The house market of Sefton (Bankstown)

15.  The house market of Dundas (Carlingford)

16.  The unit market of Smithfield (Fairfield)

New research commissioned by RentRabbit.com.au has found the top 10 rental markets in Victoria that are desperate for more stock. The quarterly RentRabbit.com.au Rental Crisis Report identifies the top 10 suburbs in Victoria where tenants desperately need more rental accommodation to come onto the market, because the suburbs: Have incredibly low vacancy rates Have low…

New research commissioned by RentRabbit.com.au has found Perth’s standout suburbs for tenants who want to live in good locations but have only average incomes. The quarterly RentRabbit.com.au Tenant Opportunity Report identifies the top 20 suburbs in Perth where tenants can find affordable rents in decent suburbs that are within commuting distance of the CBD. To…

Why are my rental applications being rejected? I have been applying for rental properties, but my application gets denied every time. I don’t know what I am doing wrong. Why do I keep getting rejected when I apply for a rental property?” If this sounds like you, you are not alone. Many people looking for…

A positive landlord-tenant relationship is crucial to any rental experience. Most landlords will go to great lengths to find and keep qualified, trustworthy tenants. Those who honor lease terms, respect the property and display financial responsibility. However, your desirability as a tenant goes beyond a good credit score and a clean background check. There are…

New research commissioned by RentRabbit.com.au has found Adelaide’s standout suburbs for tenants who want to live in good locations but have only average incomes. The quarterly RentRabbit.com.au Tenant Opportunity Report identifies the top 20 suburbs in Adelaide where tenants can find affordable rents in decent suburbs that are within commuting distance of the CBD. To…

Step 1 – Know Your Rights In New South Wales when you rent a place to live, you will usually be asked to pay a rental bond. A bond is not compulsory. The rules around bonds are set out in the Residential Tenancies Act 2010 and Residential Tenancies Regulation 2019, the bond is required to…